Tags: Down to the Last Pitch, Minnesota Twins, Johns Hopkins, One More Page Books, Atlanta Braves, Politics & Prose, Bergino Baseball Clubhouse, St Paul, Minneapolis Library, Roswell Park, Civil War, Summer of '68
Perhaps the strangest thing about being a writer these days is the mind-boggling, whiplash shift that's sometimes required. Since early April I've been on and off the road, promoting DOWN TO THE LAST PITCH. It's been a ton of fun as I visited great venues in 10-plus states and met some awesome people. Folks who wanted to hear what you had to say and enjoyed your work. A writer cannot ask for a better reception.
But now I'm home, back at my desk, deciding what the next project will be.
I'm having fun with a sequel to my first novel, Castro's Curveball. So much has changed in Cuba since I wrote that book in the late 1990s. Back then players got out on rafts. Now they are spirited away by high-powered agents on cigarette boats.
I'm also having fun researching the Confederate spy colony that resided in Canada during the Civil War. How close they came to creating real mayhem in a conflict that was up for grabs for so long.
And, finally, the good folks at Roswell Park in Buffalo have put me in touch with several medical heroes who successfully turned the tide against childhood leukemia back in the late 1960s and into the 1970s when my younger brother was battling that insidious disease.
My plan? To do them all, but which one first? That will be decided in the upcoming months.
Be the first to comment 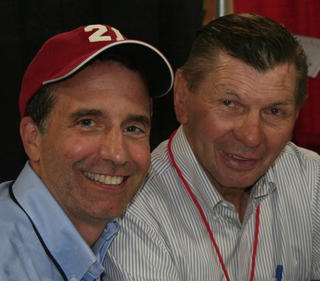